MKV is a common file format for videos. In this article I will show you how what options exist for bringing .mkv on your Apple TV.

No, the problem is files with the file extension .mkv are not supported by Apple TV. MKV means Matroska which is a container format (like .mp4, .m4v, .avi or .mov) that can hold video, audio and subtitle streams. So if you have some MKV files (for instance on your NAS, USB stick or external Hard drive), you need to find a “workaround” to watch them on your TV.

What are MKV files exactly?

In general, it’s important to understand that Matroska is not a video or audio compression format. It’s just the envelope for several streams (and those streams are encoded with an video/audio codec like H.264 or AAC).

In the following screenshot you can see that this MKV video has 3 streams. You can check this with VLC by pressing “Cmd + I” (Window > Media Information). 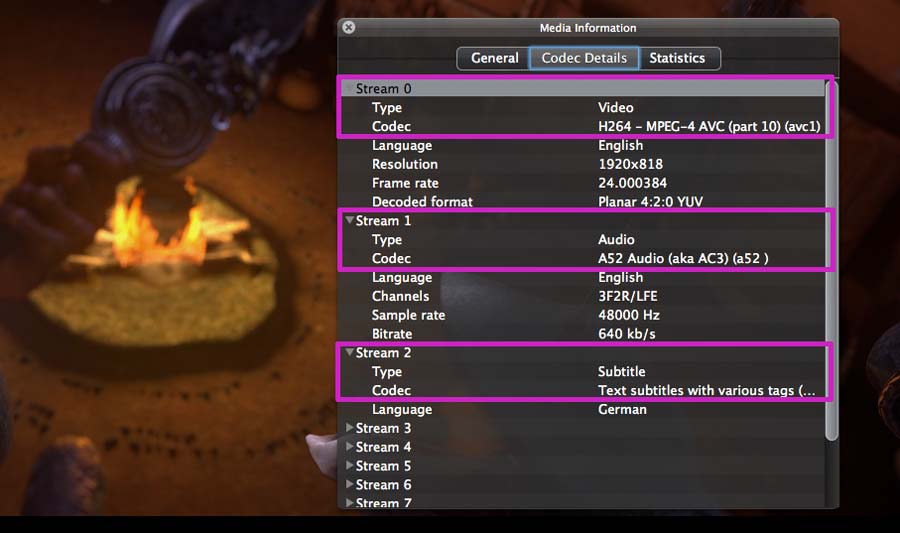 How can I stream MKV videos to my Apple TV?

Depending on your source file (and/or your hardware), there are several ways how to get your video working with Apple TV and AirPlay:

A nice and easy way, if you have a modern Mac, is AirPlay Mirroring. Basically, this means that you play the video with your Mac (for instance with VLC) and just mirror your display to the Apple TV.

The big advantage is that you can instantly start watching your video.

This works for all videos, that have compatible streams inside that are encoded for instance with H.264 and AAC.

For remuxing use a software like Subler. Open the .mkv file, select the streams and pass them through to a .m4v file. This doesn’t too long because it’s just “copying files”. You should prefer remuxing to transcoding because you leave the streams untouched and avoid losing quality.

Transcoding / Re-encoding of your MKV video

If the video or audio stream in your MKV file isn’t supported by Apple TV, you have to re-encode it. This means converting the streams to a different codec, bitrate or resolution and save it in a compatible container file format (like .m4v). This is time-consuming and could cause a loss in quality.

For further details, I will write some posts about software like Subler, Handbrake and so on. So be sure to check out all posts in this blog.

You can stream MKV on Apple TV without conversion with Elmedia Player PRO. Starting from version 6.6 Elmedia Player supports streaming of all formats, except VIDEO_TS, .swf and .exe, so you are no longer limited in the format choice.