For example, you have AirPlay-enabled speakers in the kitchen and in the dining room. It seems reasonable to suppose that, at least sometimes, you want to stream to both rooms simultaneously. With AirPlay you can do that, but it depends on the sender.

From iOS, AirPlay is limited to one single destination and it isn’t possible to stream simultaneously to multiple AirPlay receivers. So no chance and official support from Apple with your iPhone or iPad.

But there’s a one way: iTunes (10 or later) on your Mac allows you to choose multiple destinations for playing music in sync (including your Mac output). The limit is 6 AirPlay devices but it depends:

The maximum number of outputs is three to six. The number that works for you depends on your environment (such as building composition and local radio interference), distance to the outputs, and available network capacity relative to your other usage.

You can choose an overall master volume for all outputs. Additionally, each output can be adjusted separately to have a more precise control. 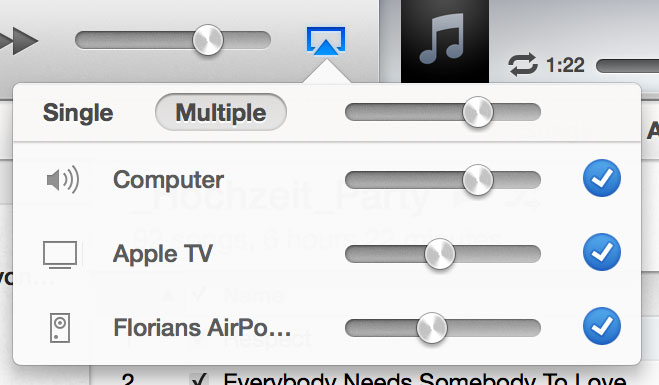