There are several easy ways to watch your HBO content on your Apple TV. In this article, I give you an overview how to do this.

Don’t be confused: There are 2 services with similar names (HBO Now and HBO Go). HBO Go is included as part of your HBO subscription from your TV provider while HBO Now is a stand-alone service (so no cable or satellite subscription is required.

Check out this HBO-FAQ for further information.

HBO Now can be used on the following devices: Apple TV, iPad, iPhone, iPod touch and requires iOS 7 or iOS 8. You can also a browser version for your Laptop or desktop computer.

There’s a free trial to all new customers that sign up via Apple TV or the iOS apps. The trial was introduced with 30 days, but was reduced to one week in the meantime.

Like shown in this screenshot, you have the regular AirPlay options (if you want to use your iOS devices for playing the content). An even easier way to watch HBO on your Apple TV: There are the official Apple TV Apps provided by Apple. You can find them on the home screen of your Apple TV. 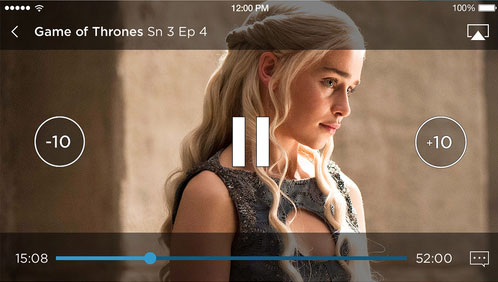 HBO Now: Subscribe to HBO right from your Apple TV — no cable or satellite subscription required.5 With HBO NOW, you get instant access to HBO’s award-winning original programming along with exclusive Hollywood blockbusters, sports, and more.

HBO Go: If you have an HBO subscription from a cable or satellite provider, you can watch the best of HBO whenever you want.5 Curl up with movies, documentaries, and HBO originals you really want to watch (and talk about) like Game of Thrones and Girls, including bonus features and behind-the-scenes extras.